Stand fast therefore in the liberty wherewith Christ hath made us free, and be not entangled again with the yoke of bondage. Galatians 5:1

Many people are asking questions about the Berean Free Seventh Day Adventist Church. 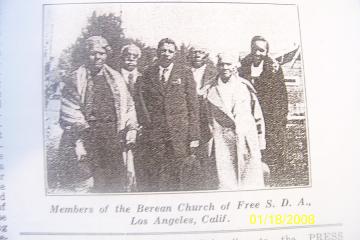 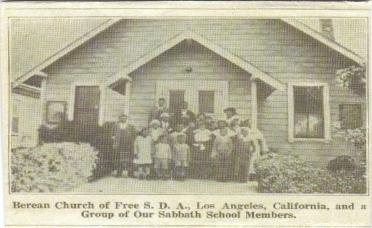 The Berean Free Seventh Day Adventist Church became incorporated December 21, 1916. During this time L.C. Sheafe was the chairman , C. Lillian Lattimore was the secretary, and C. Anderson was one of the Board Members.

“…Correspondence was established with the president of the General Assembly.” “It was to this body of believers, that the Berean church made application for membership. After certifying its belief in all the doctrines of truth taught by Seventh Day Adventist, including the Testimonies written by Mrs. E.G. White, this church was received as a member of that body. It was on the 25th of August that the writer was asked to take the pastorate of said church.” J.W. Owens was the writer of this article and he became the pastor of this church. [1]

Work of Free S.D.A. in Los Angeles, California. Elder Mosley’s visit— On the beautiful morn of January 29, 1931, after three days’ tiresome journey on the train, I arrived at Los Angeles, California. Bro. E. Beckham was at the station of the Southern Pacific line patiently awaiting my arrival, who afterwards conveyed me to his home, where I made my temporary abode.

Bro. C. Anderson (who has volunteered to hold the work together till the minister gets here) was elected local elder of the church.

The foregoing photograph is a panoramic view of Berean Church building owned by Free Seventh– Day Adventists. Due to uncontrollable circumstances I was unable to get the entire Sabbath School membership on the picture. Nevertheless, those who are thereon, will indicate that Berea is still pressing on the upward way. [3]

New York City— On June 7th, 1929, our new president, Elder J.B. Moseley, arrived in the city. We were indeed glad to welcome him in our midst. Sabbath morning, June 8th, our heart were again made sad, as he gave us a graphic picture of the events that surrounded, and were doubtless the cause of the death of our beloved leader, Elder J. W. Manns. It is indeed a dark cloud of mystery that overshadows his death. However, we are leaving it all to the Righteous Judge who will bring all secret things to light in the great day of judgement, and avenge the adversary. [4]

Funeral of Elder Manns—Ye have prophecied that since Mann is dead our work will come to naught. But let me retrograde your mem’ries back to the time of the reformation. When Rome burnt John Huss and Jerome at the stake, cast theire ashes into the Rhyne, and deemed ’twas a token of demolishing the work of reformation; the tide turned to the reverse. That instead of retrogression, ’twas a symbol of spreading the reformatory work over land and sea, till untold blessings were bequeathed to the Christian world through the instrumentality of those beacons of reform. Consequently, Elder Manns’ death is a token of spreading the work of Free Seventh-Day Adventist throughtout earth’s remotest bound. Yea, this work must go by leaps and bounds till the meridian of the consummation of all things. [5]

George Cuthbert, Who is he? And who would waste time to fight him? From during the time of Elder Mann’s sickness in Port Limon, Costa Rica, Mr. George Cuthbert was trying to poison the minds of the public, as well as our members against me. His sole aim was to overthrow me and the work of Free Seventh-Day Adventists, in order to establish Seventh-Day Baptist, so that he may reign supreme. [6]

Answer: No, it is not. For further information please contact us, and request the DVD on more History. This information will prayerfully answer all your questions and concerns.

The organization was founded in 1912 by J.W. Manns. He bought property from Cora S. Cassels on November 29th 1912.

Next, he made arrangements for the church to purchase the property from him on October 15th 1915.